The EPLO is an international organization dedicated to the creation and dissemination of knowledge in the area of public law lato sensu, including but not limited to inter alia national, comparative and European public law, human rights law and environmental law for a better generation of lawyers and democratic institutions worldwide.

The EPLO was established in 2007 in Athens, Greece and is growing rapidly. Today 17 Countries, 4 Public Authorities, as well as 71 Universities and Institutions are members of the EPLO Board of Directors. Headquartered in Athens, it maintains 14 offices around the world. Find out more at www.eplo.int

By cooperating with the European Commission and other international organizations such as the United Nations and the World Bank, as well as being a member of EUNIDA and IACA, the EPLO has carried out extensive research and consulting activities. It has also developed, organized, and supported around 200 educational, research, training, institution building and other activities and has provided assistance to democratic institutions in more than 70 countries around the world.

The work of the EPLO focuses on four pillars, each one perpetually contributing to the improvement of the others through an integrative approach.

2. Education and Training: Shares, accumulates & advances the intellectual capital required for the development of legal systems and transfers the know-how in a train-the-trainers approach. The EPLO has established high caliber educational agencies & programs addressed to graduates and practitioners, enabling them to enhance their knowledge and promote their career in a flexible and time-saving way. In addition to the “The Academy of European Public Law”, the EPLO implements the following programs: the “Academy of Transparency and Human Rights”(http://athr.eplo.eu), the “European Institute of Management”, the “Training Institute for Law & Governance” (http://lawtraining.eplo.eu) and the “Global Law & Governance Summer School” (www.glgss.eu).

Find out more at www.eplo.int 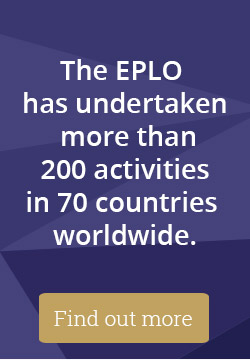